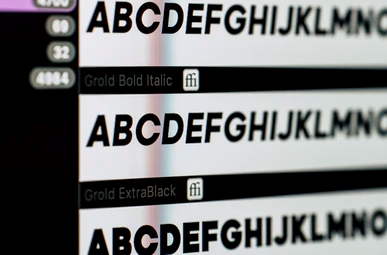 Fonts are very important in a mobile app. In React Native there are many built-in fonts. Most of them are the same in iOS and Android, but there are some differences.

For this, we will create two apps—one with React Native CLI and the other with Expo CLI. We are doing this because the process for using custom fonts is different in both.

We are going to first use React Native CLI. We also need to run both the Android emulator and the iOS simulator.

To create a new project, run the below command from the terminal:

After installation is done, we will see the below screen:

To start our project, run the command npx react-native start from the project directory.

To start the project in the iOS simulator, run the command npx react-native run-ios.

We will first look at the built-in iOS fonts. For this, create a folder called components in the root directory. Create a file InbuiltIos.js in it. Now we will first import it in an App.js file.

It will show like below in the iOS simulator.

We have a lot fewer built-in Android fonts. To check them, first create a file called InbuiltAndroid.js in the components folder. Now import it in an App.js file.

Next, in the InbuiltAndroid.js file, add the below content. The mentioned fonts are available in Android.

As we have seen, there are not as many fonts available in Android. We can easily use custom fonts like the ones from Google in an Android app. For this, we first need to download fonts from Google Fonts.

After downloading some fonts, we need to add them in our project. So, create an assets folder in the root directory. Inside it, create a fonts folder. Now add all the TTF files to it.

Next, for React Native to recognize this file, add a react-native.config.js file in the root directory. Here we are adding the location for the fonts folder.

Now run the command npx react-native link from the terminal to add these fonts.

Next, create a file CustomAndroid.js inside the components folder. We need to import it into the App.js file.

In the CustomAndroid.js file, add the below content. Notice that we have to use the exact name as the downloaded TTF file.

So, we will now see these nice fonts in the Android emulator.

We can use the downloaded Google fonts in iOS also. But we need to give the font names from the document and not the file names. To get the font names, just open each TTF file.

Next, create a file called CustomIos.js inside the components folder. We need to import it into the App.js file.

After that, in the CustomIos.js file, add the below content. Notice that here we have all the exact names, which we got by opening the downloaded TTF files.

We will now see these nice fonts in the iOS simulator.

There is a different way to use custom fonts in an Expo project. So, create a new project with the name rn-fonts-expo using the following command:

Now change to the directory and run the npm start command.

Now, press a to open the project in the Android emulator.

Now we will use a custom Google font in our Expo. First, go to Google Fonts and choose a font. We have chosen the font named Black Ops One.

Next, to get the exact font name, we need to go to this Google fonts directory. We have searched for Black Ops One to get the import command.

Now give the below command from the project directory:

We also need to install the expo-app-loading package. So, install it in the same project directory.

Next, in the App.js file, remove all earlier content. Here we are importing and displaying a component of ExpoAndroid.

We will now create a file named ExpoAndroid.js inside a components folder in the root directory. Inside it, we are first importing the Black Ops One font using the import statement we got from the directory.

Now the Black Ops One font is shown perfectly in our Android emulator.

We can also use the font files in Expo, as we used earlier in the React Native CLI project.  First, we will create a font folder inside the assets folder. Inside we will put some font files, which we downloaded earlier from Google Fonts.

Inside the useFonts hook in the ExpoAndroid.js file, we have to give the name and the exact path of the fonts. After that, inside our return statement, we can use these fonts.

Now we will see all these new fonts in our Android emulator.

We can easily use icon fonts in Expo, as they're built-in in Expo. We can get different icons from this directory. In the ExpoAndroid.js file, first import Ionicons and AntDesign. After that, inside our Text, we are using two icons from these icon families.

Now the icons are shown perfectly in the Android emulator.

The APK or IPA file is required for testing, which we'll cover in this section. To create an APK file with Expo, we'll follow the instructions in the official docs.

From the folder containing the project, run the below command:

Now we need to give the Android package a name.

If we are using Expo for the first time, it will ask us to authenticate. We need to enter our credentials.

On the next screen, keep the default option of "APK" and press Enter.

Next, select the default option to generate a new keystore.

The APK build process will start, which will take around 10 minutes to finish. We'll get a link to our build once the process is finished.

Just copy the link, open it in a browser, and save it.

We will test our code with the awesome no-code testing platform Waldo. For this, we need the APK file saved from the previous step.

We need to first create a free Waldo account. Since we already have a build, click the Upload a new build button. It will open a pop-up to upload the APK file.

The process to upload an APK file is very fast. It will also verify our app.

Now we'll see our build. To test our app, we need to interact with it. After doing this, click on the Save test button, and our test will run.

In this post, we've discussed how to implement fonts in different ways: through built-in fonts in a React Native CLI project, built-in fonts for both iOS and Android, custom fonts for both platforms, custom fonts in an Expo project, and icon fonts in an Expo project. Finally, we showed how to create an APK file using Expo and also effortlessly completed testing using the no-code platform offered by Waldo.

If you're looking for an easy way to test your mobile apps, we encourage you to give Waldo a try for free.